My attempts to marry DSC and vSphere have been going on for nearly a year* now. I showed some of my attempts and intermediate results at VMworld 2015, in two sessions at the PowerShell + DevOps Global Summit and recently during a session at the 24th VMUGBE+. But now I’m finally going public with the vSphereDSC module.

Since WMF 5 has been made available in preview, and still is in RTM at the moment I’m writing this, there have been constant changes to the way I was writing the DSC resources for vSphere. Since the February 2016 WMF 5 release, I now have a (somewhat) stable, working class-based solution. At least, that is what my initial tests seem to indicate. 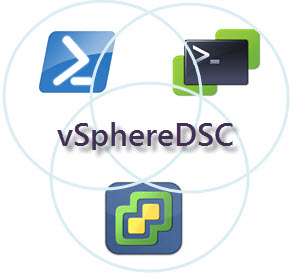 This intro for my vSphereDSC series, will lay out the playing field. I’ll explain the concept I’m using, show some of the issues I encountered and explain the layout of the vSphereDSC Resource module.

To start you’ll need some knowledge on what DSC (Desired State Configuration) is all about of course. This series of posts is not going to do that!

But don’t despair, there are many free, online resources available that explain way better than I ever could, how DSC works. To name but a few:

Also check out the numerous blog posts and session recordings that have been made available. Google/Bing are your friends!

Not free, but there are also many DSC books available, and most of the major course vendors have one or more DSC Courses in their catalog nowadays.

I would also like to give a shout out to Brandon Olin, who is developing a DSC Resource module named POSHOrigin_vSphere. He uses a different angle to configure a vSphere environment through DSC. At the moment he has an impressive VM resource in his module.

The LCM (Local Configuration Manager) is the DSC component that takes care of the “make it so” part. On regular intervals, or when you tell it to, it compares the Configuration, it has or has received, with the actual situation on the host.

If there are differences, and if the LCM was configured to correct this, the LCM will “correct” the drift. It will “Make it so!” 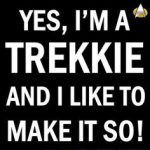 The first decision I had to make, was where are we going to run this LCM that will interact with a vSphere environment. An obvious choice would be to install it on the vCenter server, but there are some strong counter arguments for that.

The obvious choice, for me, was to introduce a “helper” server, the vEngine!

The LCM that configures/corrects the vSphere environment, will run on this vEngine Server. The vEngine Server only needs PowerShell and the PowerCLI modules/pssnapins. And it will “talk” with the vSphere Server via PowerCLI. 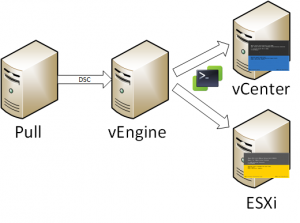 The workflow for this setup will look something like this 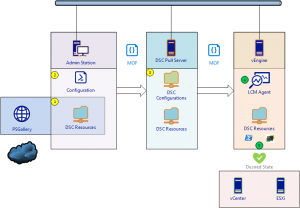 (1) The vSphere administrator makes sure he has the required DSC Resource modules on his workstation. This includes the vSphereDSC module. These modules can be retrieved from public or private repositories.

(2) The vSphere administrator creates a Configuration for his vSphere environment.

During my work the vSphereDSC module I did encounter several “issues”. Some where caused by actual bugs that hopefully will be fixed when WMF 5 is released. Others were/are in fact caused by some of the design decisions in WMF 5. Remember that WMF 5 as we can currently use, is not yet the official release version.

A short summary of the issues (and the effect they had on the vSphereDSC module):

As you have gathered from the Issues paragraph, there have been some changes to my original plan. A quick summary of what I have and how I organised it.

In fact I try to follow the layout as described PowerShell\DSCResources as close as possible. The following is a quick treeview of part of my private repository. It shows the general layout, more details will follow in the posts that will discuss individual resources.

I used to sometimes reply with “Why do people climb mountains ?”. But that was of course intended as an icebreaker. There are, in my opinion, enough reason to switch to configuring your vSphere environment through DSC.

Because I know each one of you will encounter the same question(s) when you propose DSC to configure your vSphere environment, I decided to start listing the arguments and some potential use cases in here. And my list is obviously far from complete, please contribute, and send me arguments and use cases you see.

This concludes the vSphereDSC Intro. The scene has been set
What’s next ?

In the next posts in this series, I will start expanding into the individual resources that are present in the vSphereDSC module.