The REST API were officially announced during VMworld EMEA 2016 in Barcelona.

Recently Kyle Ruddy published two blog posts on the VMware {code} blog that showed how to get started with both SDK.

Both should be in your reading list, since they are excellent introductions to the REST API usage, although not with our favourite tool 🙂

Note that what I show in this series is not the only way to consume the REST API. The Connect-CisServer, the Get-CisService and the Disconnect-CisServer cmdlets also give you access to the vSphere Automation SDK services. You can find great examples of working with those cmdlets in William Lam‘s series Exploring new VCSA VAMI API w/PowerCLI. Those should go into your reading list as well!

I do my exploration of the vSphere Automation SDK for REST in a vSphere 6.5 environment. My vCenter is a VCSA, and I’m using PowerShell 5.1.

Besides the PostMan tool, which is described in one of Kyle’s posts, I also find it handy to use Fiddler2 while coding and debugging. It acts as a proxy between my code and the VCSA.

When you’re working with the REST API you have to install the REST API repository on your system. They did a good job of producing this documentation. 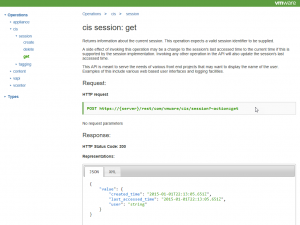 The code for this series is available in my OpenSdk repository.

As I already demonstrated in my Ravello module, it is quite easy to consume REST API with PowerShell. With the Invoke-WebRequest cmdlet calling REST API becomes a breeze.

A few basics one needs to be aware of.

One might wonder why I would be looking at wrapping these REST API in PowerShell code! More so, since these API can be consumed via native PowerCLI cmdlets (see my earlier note). I did in fact the same before starting this series, and I came up with these (random order) arguments.

In this first part there are only two functions available, a function to connect, and another to get the list of ESXi nodes in the environment. These two functions allowed me to tackle a number of the basic issues, so future functions should come faster 🙂

These two functions do, currently, not allow for a lot of variation. Open a session, get the list. That’s it.

In Fiddler2 the connection call is seen as follows. Note the User-Agent is PowerShell 5.1.

Notice how the encoded Authorization header is passed to the REST API.

The REST API returns the session ID. Instead of using a restricted header, this will be passed along through the WebSession parameter on the Invoke-WebRequest cmdlet..

In the subsequent calls to other REST API, the session id will passed.

And of course the result of our REST API call. 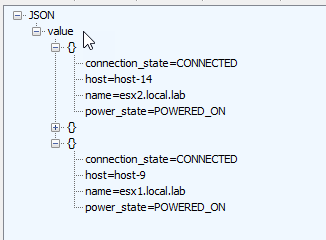 As we can notice, the result is returned as a JSON object. In one of the next posts in this series, we will discuss how to convert this to a PowerShell object.