In a previous post in this series (see PowerCLI & vSphere statistics – Part 2 – Come together), I showed the usefulness of the Group-Object cmdlet when working with statistical data. The script in that post grouped data samples for each hour together, which made it much easier to calculate the hourly average. With the Group-Object cmdlet you avoid numerous nested if- or switch-statements.

And best of all, you don’t have to code the grouping yourself, it was all done for you by the PowerShell Team.

So make sure this cmdlet belongs to your basic PowerShell repertoire. It will prove invaluable when processing statistical data.

This post will show you several of the different options you have to group statistical data together. And I will illustrate each of these with a sample script.

Let’s start with something simple.

We want to produce a CSV file with the average CPU usage per core on a specific ESX host over the last full hour.

With the -Start and -Finish parameters of the Get-Stat cmdlet we can limit the returned data to the last full hour.

And we know that the Instance property has the core-Id or an empty string, to indicate the aggregate value (i.e. the average over all cores).

It is then the obvious choice to group the data on the Instance property.

Line 3: Gives a timestamp with the current hour minus some seconds so as not to get a value for the full hour.

Line 6: We use the -IntervalMins 5 parameter to make sure Get-Stat returns values for the complete hour. If you leave out this parameter, the Get-Stat cmdlet in some cases returns samples from the Realtime interval. But then you risk, depending how many minutes after the full hour you run the script, that you don’t have samples for the complete hour.

Line 7: The returned statistical data is grouped on the Instance property, which is the Core-Id.

Line 8: The Where-Object filters out the data for the aggregate instance (the average over all the cores).

Line 9-12: This uses a PowerShell v2 feature (-Properties) of the New-Object cmdlet.

Since a picture says more than a 1K words, a simple diagram. 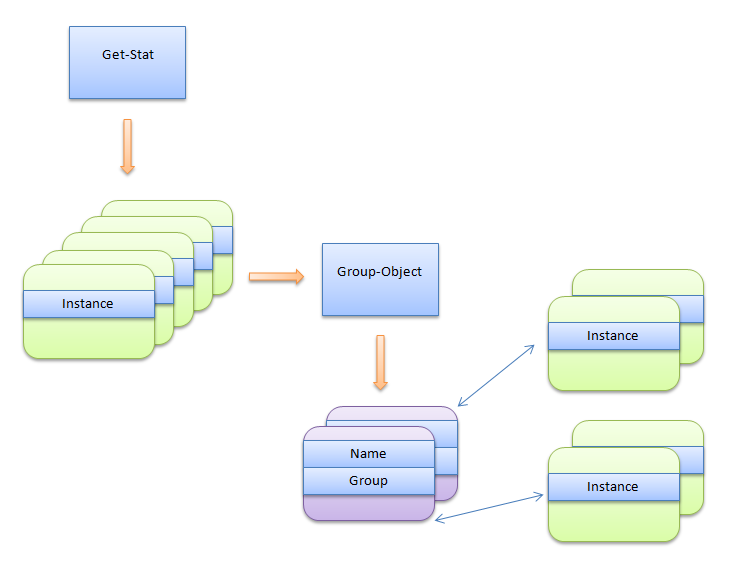 If we have a look with the Variable Inspector from PowerShell Plus, we can see how the $groups variable is composed. 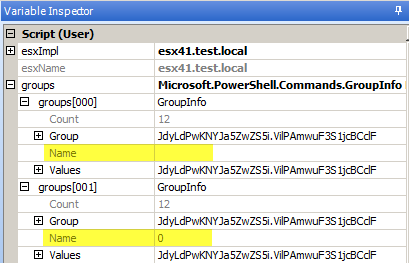 The Group-Object cmdlet creates a GroupInfo object for each “group” it detects.

In the Name property we get the value that was used for a specific group. For $groups[0] this is an empty string, in other words the group for the aggregate value. In $groups[1] we can see from the Name property that this group instance was for core-Id 0.

The resulting CSV file looks like this when the script is executed on single quad-core Nehalem processor with hyper-threading enabled. 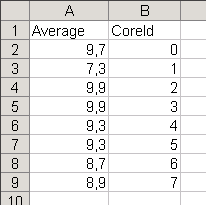 The previous script produced a CSV file for a specific host. But what if we want the same type of CSV file for multiple ESX hosts ?

In fact this is quite easy with the Group-Object cmdlet, just add the Entity property to the -Properties parameter.

Line 6: The additional property Entity was added to include it in the grouping process.

Line 9: The first element in the Values array is the hostname. The order of the elements corresponds with order that was used on the -Property parameter of the Group-Object cmdlet.

Line 10: The second element is the core-Id.

Another look at your best friend the Variables Inspector makes all this perhaps a bit clearer. 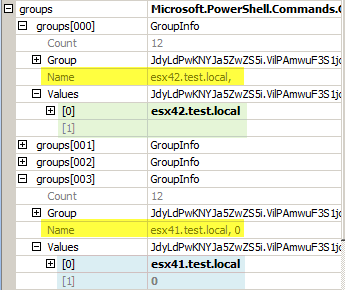 Notice how the Values property contains an array with values for the conditions for a specific group.

And the resulting CSV file looks like this. This was produced for three ESX hosts each with a quad-core Nehalem processor with hyper-threading enabled. 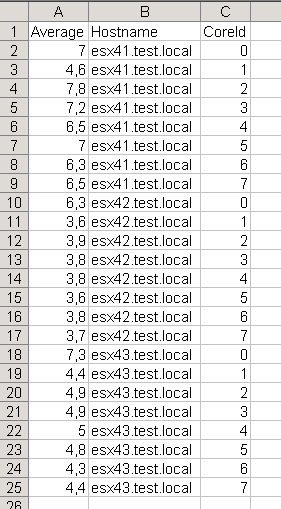 We take our first sample script one step further.

This time we only want to report the intervals where one or more of the CPU cores used more than 15% of their capacity. I know this 15% is not really a realistic report but consider it’s for demonstration purposes and I didn’t want to overload my test boxes 😉

Line 7: The -Property parameter is now a script block that can return $true or $false. The test for the aggregate instance is now included in the Boolean expression.

Line 8: Another great concept by the PowerShell Team, the array of GroupInfo objects is in fact a hash table! Which means you get access to a specific group by using the required condition value as a key. Since we want all the conditions met, we use the $true key.

The view with the Variable Inspector. 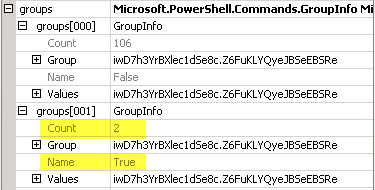 And the resulting CSV file.

And for the “Pièce de résistance” we now do this for multiple ESX hosts and we want to produce separate CSV files for each host.

Line 6: The method for the first grouping is identical to that of the previous script.

Line 7: The second grouping is done with all the values where the previous Boolean expression returned $true. On those values we now group per Entity which allows us to create  a separate CSV file for each host.

Line 8: The script loops through all the groups (e.g. hosts).

Line 9: The script creates an entry for each statistical value.

In my test environment there were two hosts that had cores where the average CPU usage was higher then 15%. 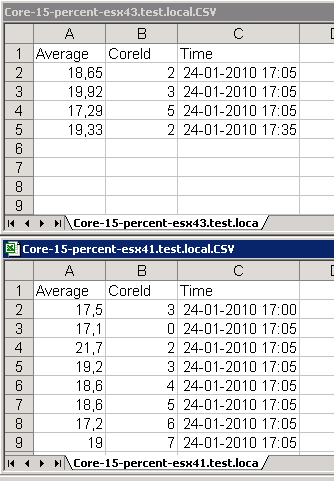 I hope this post made you see the usefulness of the Group-Object cmdlet.

Feel free to post any questions or remarks in the Comments section.