I had the pleasure to present a session on “PowerCLI and vSPhere Performance and Capacity reporting” during the Dutch VMUG meeting of February 8th 2013. Although the meeting took place in the “Karnaval” weekend, there was a great turnout and, as always, a very attentive and interested audience. Thanks for attending the session guys ! 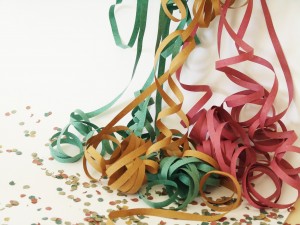 In the session I tried to show how easy it is to produce decent performance and capacity reports about your vSphere environment with PowerCLI. During the session I did some demos to show some aspects of PowerCLI and statistics. This post contains the code, and some annotations, I used during these demos.

I started off by showing what is available in PowerCLI for working with vSphere statistics.

Line 10: In PowerShell v3 you can have your help displayed in a separate window, very handy to have the window open while writing your code.

Line 13-39: The Get-StatType cmdlet is used to find which counters are available for which VIObject in which time interval. See my PowerCLI & vSphere statistics – Part 1 – The basics post for additional info on counters.

Line 21-39: Depending on the interval you select, and the Statistics Level that is set in your vCenter, you will see a different number of available counters.

Line 44-51: Several counters return metrics for all the available instances and an aggregate counter. That aggregate metric is in fact the average over all the available instances. On the PerformanceManager pages that list the counters, you can see if a specific counter reports on instances or not. This also the first sample use of the Group-Object cmdlet, a cmdlet you must master when you are working with vSphere metrics.

Line 53-56: In the current PowerCLI release some counters can not be retrieved with the Get-Stat cmdlet. In that case you will have to fall back on the QueryPerf method available on the PerformanceManager object. Or you can use my Get-Stat2 function where I encapsulated that method in a PowerShell function.

In the following script I present a quick method to create your own Counter Reference page.

Line 8: The Exports-Xlsx function is available in Export-Xlsx, the sequel, and ordered data, or on Gilbert’s blog ITPilgrims A personal sandbox.

The Level column shows the Statistics Level at which this counter is available.

The StatType column shows the type of statistical measurement that is used for a counter. See PerfStatsType.

The Key column shows the internal key that vCenter uses for the counter. This value is unique for each environment, it depends on the features and components that are installed in your vCenter. This Key is used when you create for example an Alarm that is triggered on a performance counter exceeding a threshold. See for example Alarm expressions – Part 1 : Metric alarms.

In the following demo I tried to show how you can improve the performance of your statistic data gathering scripts. The first script shows the non-optimal method of gathering the data. A Get-Stat call for each counter and for each VIObject.

By limiting this to just one Get-Stat call your script will be considerably faster.

The use of the Group-Object cmdlet is key when retrieving statistical data. It allows your script to execute only one Get-Stat call and then separate the retrieved metrics based on a number of properties of the returned objects.

Line 5: We don’t want the aggregate metric for this report, so we filter it out with a Where-clause

Line 6: The returned metrics are grouped by the name of the entity and the instance.

Line 10-13: Another cmdlet that is indispensable for working with statistical data is the Measure-Object cmdlet, it allows you to perform simple statistical functions on the data.

Line 14-20: In the results we want to see over which time period the data was collected, so we use the Timestamp on the first and the last returned metric to get these DateTime values.

The final demos showed some ways to add graphics to your reports.

The first one uses the Chart feature of Excel. With the Export-Xlsx function you easily add a chart to the worksheet or on a separate worksheet.

This way you have access to nearly all the charting features that are available in Excel. The result looks something like this. 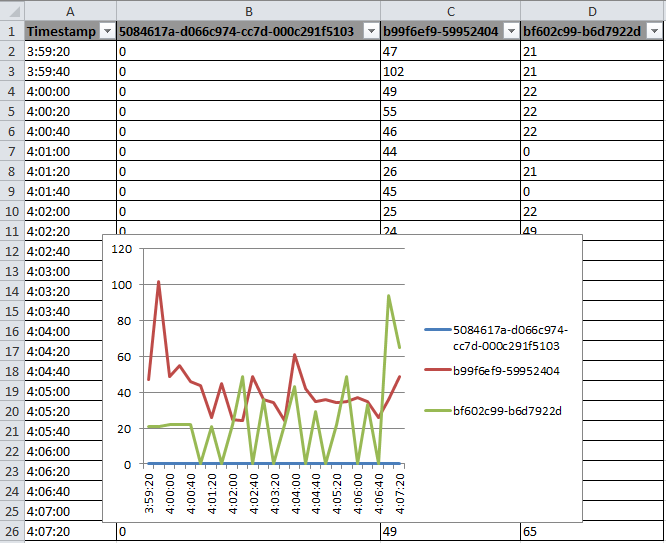 You can also use a commercial product like for example PowerGadgets. They offer a number of cmdlets to produce and annotate graphs.

Line 17: In the $values variable the script collects the names of the Instances, which are the property names in the objects that were created before. These names are used to define which columns contain the data that needs to be added to the produced graph.

Line 19-24: There are numerous parameters on the Out-Chart cmdlet that can be used to annotate the produced graph.

Line 24: Since we collected the metrics in the Realtime interval we only want to see the time part of the Timestamp property. Notice how you easily use a .Net function in your PowerShell scripts.

This post can of course not replace a “live” session, but I hope the demos that are in this post will help you to do your own discovery tour of PowerCLI, vSphere statistics and reporting.