With the introduction of vSPhere the types of Tasks you can select when you create a new Scheduled Task has increased. This is a very useful feature that allows you to schedule for example your (s)vMotions, your Snapshots, your Imports and Exports and so on. 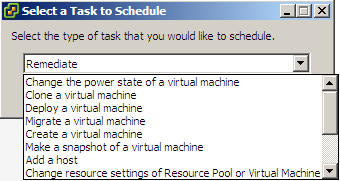 In the PowerCLI Community there was a recent question on how these Scheduled Tasks can be created from PowerShell (see relocate vm’s from csv file and create schedule task in VC).

Being able to create a Scheduled Task for a svMotion for several guests from a PowerShell script, instead of clicking away in the vSphere Client, would be another step on the path of vSphere automation.

The current PowerCLI 4 (build 162509) unfortunately has no cmdlets for Scheduled Tasks. But the SDK contains the CreateScheduledTask method that can be used for this purpose.

The key parameter to this method is the ScheduledTaskSpec object. In the action property of this object you specify which type of action you want the scheduled task to take. If we want to schedule a Task, we will have to select the MethodAction extension object.

But then it looks as if we’re stuck. The SDK Reference doesn’t say which are the accepted values for the name property in the MethodAction object.

Luckily, with a bit of reverse engineering and with the help of Fiddler (see my The Onyx alternative ? post), I was able to get the accepted values for the name property.

In fact the set up is quite straightforward, the name property holds the name of the SDK method that performs the type of task requested. And the argument property, which is an array, will hold all the parameters that go with the called method.

We want to “Migrate a virtual machine” and move the VM to another datastore.

That means we need the RelocateVM_Task method.

The following table shows which SDK method corresponds with which Task. With the name of the SDK method you can find the parameters that need to go in the MethodAction.argument property.

The Virtual Machine names come from a CSV file with 1 column and with the header VMname.