In a comment on my Events – Part 3 : Auditing VM device changes post, Ian asked if it was possible to report who started a VM.

To take away the suspense, yes that can be done by using the information from two of my earlier post. 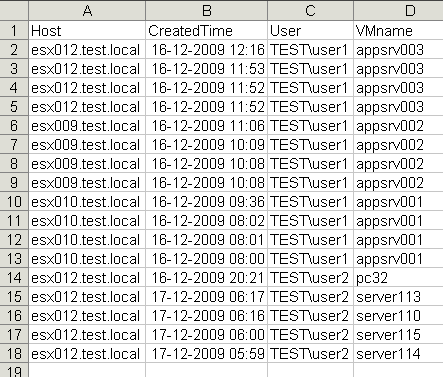 Since I considered it a bit too long to give the solution in a comment, this post.

First you will have to find which event(s) to use for a power on of a guest. For that use the CSV file of all events that I blogged about in Events, Dear Boy, Events – Part 2.

It’s obvious that you will need the VmPoweredOnEvent.

The first script in Events: a great source of information – Part 1 shows how to get at the user information in the event object via the userName property.

First the script with only PowerCLI cmdlets.
Turns out we can do this with a one-liner !

Line 1: The Where-Object (alias ‘where’) cmdlet only passes the events we’re interested in

The second version of the script uses the event collector methods as described in Events: a great source of information – Part 1 (second script in that post).

Both scripts produce a CSV file that gives all the information we’re after. See the first screenshot in this post.
The difference is in the execution time, the 2nd script ran nearly 35 times faster than the first script in my test environment. Quite important if you have to go back far in time or if you are auditing a big environment !

You can use any of the above scripts as skeletons to hunt for other audit information. Just plug in the event(s) you’re after 😉

A personal reflection, it would be useful that in a future PowerCLI build, the Get-VIEvent cmdlet would have a ‘filter‘ parameter. That would get rid of the Where-Object cmdlet through which we now have to pipe all the events.