I received an interesting comment on my Events – Part 7 : Working with extended events – Update Manager post from Suresh. He wanted to know if it was possible to create a similar report with the vCenter Update Manager PowerCLI cmdlets as you can get with the esxupdate query command.

Luckily, the HostPatchManager holds the answer. Via the QueryHostPatch_Task method you have access to all the installed bulletins.

Update June 25th 2010: after comments from Suresh and James I investigated what goes wrong when you run the script against an ESXi server. It turned out that the QueryHostPatch_Task method doesn’t return the bulletins for ESXi hosts.

And this seems to be consistent with the behaviour of the esxupdate query command. 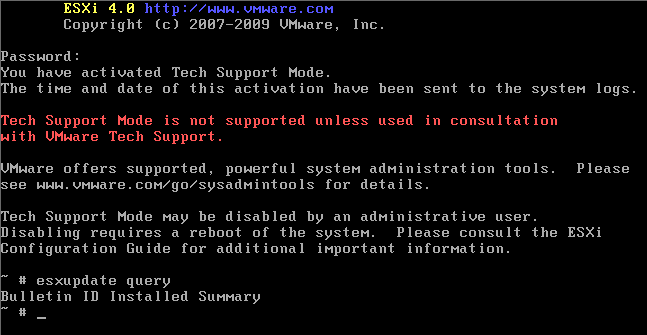 I’m not sure if this is to be considered a bug or if this is intentional !

The script has been updated to display a warning when run against an ESXi server.

Update June 30th 2010: After further investigation it looks as if the problem only exist for ESXi 4 and ESXi 4u1 servers.  Until further conclusive test I have adapted the script.

Line 4: Check if the host runs an ESXi version.

Line 9: For our initial purpose we don’t need any of the properties in the HostPatchManagerPatchManagerOperationSpec object. Note that you could pass esxupdate options. If you add for example the option -a, the method will return all bulletins, not just the ones that are applicable. You will need to uncomment lines 6-8 and comment out line 9.

Line 15: The result is returned as an XML object.

Line 16: All returned bulletins are a node under “esxupdate-response”.bulletin. Note that we need the quotes around the first path element, otherwise the dash would pose problems.

The script, as it is written above, dumps the results to the console. But you can just as well send the results to a CSV or XLS (see my Beyond Export-Csv: Export-Xls post) file.

Note that the script can run against all or a selection of your ESX servers in 1 run. You can use the -Filter parameter on the Get-View cmdlet or you can use a Where-Object cmdlet to select specific ESX hosts.

If one of the hosts you selected runs an ESXi version, the script will display a message on the console.

A nice addition to your daily reports for your ESX servers.