The PowerCLI Dev Team gave us an early XMas present yesterday. They released PowerCLI 4.1.1 build 332441 or PowerCLI 4.1 Update 1 as it is called in the Release Notes.

As usual there is a nice collection of new cmdlets and improvements on existing cmdlets in this new PowerCLI 4.1.1 build. Two of the new cmdlets that jump out for me are the Get-EsxCli and the Get-EsxTop cmdlets.

Although both cmdlets are still marked as ‘experimental’, they both open up a complete new area for automation. In this post I’ll have a closer look at the Get-EsxTop cmdlet and what you can do with it.

Dimitar already gaves us a high-level overview of the Get-EsxTop cmdlet in hist post called ESXTOP Available Through PowerCLI. But how can we actually use this new cmdlet and more importantly, what can we use it for. In this post I documented my initial steps with the Get-EsxTop cmdlet.

All the counters can be retrieved by using the -Counter parameter. The following short script will produce a CSV file with all the counters that are accessible through the cmdlet. 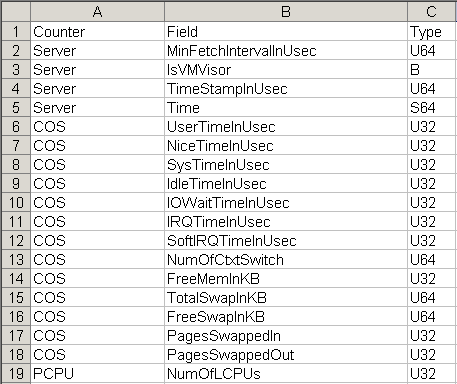 In total I found 392 such counters on my ESX 4 server.

These counters correspond with the columns you see in esxtop. In the list with counters there are a number of fields available for the VCPU counter.

As an example we are going to look for the RunTimeInSec and the ReadyTimeInSec counters in the esxtop page.

We can easily find the corresponding columns on the esxtop page.

Now that we have the name of the counter and the names of the fields we are interested in, we can start retrieving the statistical data.

Easy enough, the data is there.

But we seem to have a couple of problems.

What kind of values do we see in the RunTimeInUsec and ReadyTimeInUsec columns ?

According to the CSV file with the counters we produced earlier, these fields have U64 values. And the values are cumulative values in microseconds. So we have to calculate the difference between 2 successive sets of values and convert the value to a percentage.

Line 2: The times that are returned are expressed in microseconds. With a simple rule of the three we calculate the conversion factor.

Line 4,8,17: Since we need to calculate the delta value for the 5-seocnd interval we can only produce values from the 2nd set of values onwards.

Line 6: Note that the script does 10 calls to Get-EsxTop and that this will give us values for 9 consecutive intervals

Line 21: Since we only get new data every 5 seconds, the script waits for 5 seonds before retrieving the next set of values.
The script returns percentages for both counters.

The next challenge we face is that we don’t see the same names in our output as we see in esxtop. The meaning of the names, like for example idle1, isn’t too obvious.

The explanation on how we can get the same names as we see in esxtop can be found in the document that Duncan rightly calls the Esxtop Bible.

Esxtop uses worlds and groups as the entities to show CPU usage. A world is an ESX Server VMkernel schedulable entity, similar to a process or thread in other operating systems. A group contains multiple worlds.

Let’s use a VM as an example. A powered-on VM has a corresponding group, which contains multiple worlds. There is one vcpu (hypervisor) world corresponding to each VCPU of the VM. The guest activities are represented mostly by the vcpu worlds. Besides the vcpu worlds, there are other assisting worlds, such as a MKS world and a VMX world. The MKS world assists mouse/keyboard/screen virtualization. The VMX world assists the vcpu worlds (the hypervisor). The usage of the VMX world is out of the scope of this document. There is only one vmx world for each VM

We need to find all the ‘worlds’ that belong to a VM and group the returned statistical data accordingly.

This brings us to the 3th type of data that Get-EsxTop returns, the topology data. The information concerning your powered-on VMs, the group that represents the VM and the ‘worlds’ inside these groups are available in the SchedGroup topology. There are 26 topologies in total.

In the SchedGroup topology the Entries property is an array where each element represent a specific group. The following lines show all the known groups and for each group the worlds that use a PCPU.

The script produces a rather long list that looks something like this.
Notice the presence of the ‘idle1‘ world, we encountered before, in the ‘idle’ group. This ‘idle1’ world is the idle process that runs on 1 PCPU. 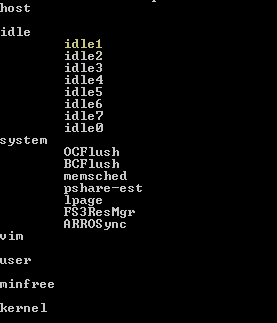 From the ‘idle’ group we can deduce this ESX host has 8 cores, since there will be an idle world for each PCPU.

A group representing a powered-on VM will look something like this. 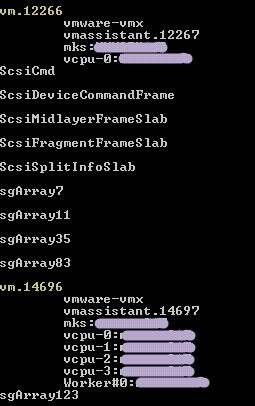 Now as it happens, the number in the name of the group is also the VCPUID number we found in the statistical data since esxtop already makes the summation of the performance data of all the worlds in a group.

Note that this way of finding the VCPUID for a specific VM is quite cumbersome and error-prone.

But that’s where the other new kid on the block comes in quite handy. Meet the Get-EsxCli cmdlet!

We can now adapt our earlier script slightly to only show the Run and Ready percentages for a specific powered-on VM.

Cross-comparing the data with esxtop and the Performance tab in the vSphere Client confirms that the returned data is correct.

That means that we can now get 5-second interval performance data !

As you can imagine this is just the tip of the iceberg, that the Get-EsxTop cmdlet is. I hope to soon produce other posts on the usage of this great new cmdlet !