I know there are already numerous scripts to report on virtual hard disks and most of them without a doubt much better then what I came up with for this post.

The reason I started with this script was a question in the PowerCLI Community from Alan in his Thin Provisioned Disks post. He wanted to know if you could get the provisioned and the allocated disk size for a thin provisioned virtual disk.

From past experience I knew that the answer was to be found in the layoutEx property of the VirtualMachine object.

The layoutEx property, that came with API 4.0, contains a wealth of information concerning the virtual disks connected to your guests.

Since you can find back the mapping to all individual files that constitute a virtual disk,  it is the ideal property to show the actual storage used by each virtual disk and the snapshots.

The following graphic shows how the three major properties in the VirtualMachineFileLayoutEx object are organised. The values in the graphic are from a virtual machine, with one virtual hard disk, and two snapshots.

I assume that most of you know what happens in the background with a virtual disk when you take a snapshot of a virtual machine. The following graphic is small aide-mémoire for understanding the basics. 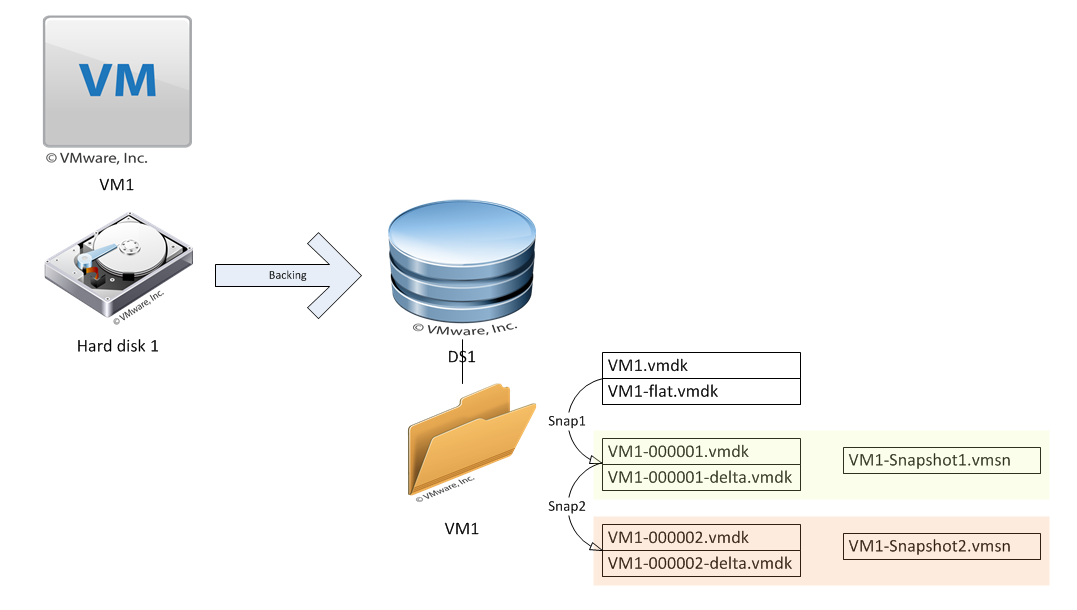 If you look closely at the Snapshot table (first graphic) you will notice that an entry points to the files, or chain of files, before the snapshot was taken.

For example, Snapshot 2 results in the FileKey sequence 0, 1, 2 and 3. While the actual new files that are created for Snapshot 2, are those with FileKey 4 and 5.

Since I wanted to know how much datastore space Snapshot 2 was taking, I decided to let the script look for the files linked to Snapshot 2. In this case that would be the files with FileKey 4 and 5.

There were a few problems to be solved:

Line 1-11: The “static” part of the C# code that defines the DiskInfo type.

Line 13: Get all the virtual machines. I used the Get-View cmdlet for speed and also because the script only needs properties from the VirtualMachine object.

Line 14: Determine the highest number of snapshot present on any guest.

Line 15-18: The “dynamic” part of the C# code. For each snapshot this adds two properties, SnapiName and SnapiMB,

Line 19: The “newline” character is not really. Just gives a better view when you dump the content of the $DiskInfoDef variable.

Line 21: The new type is created. Note that when you change anything in the definition, you will most probably have to restart your PS environment, otherwise you will get a message that the type already exists. There is, afaik, no way to get rid of a type definition in the .Net environment.

Line 23-30: This filter will recursively run through the snapshot tree and will create a hash table. The table will later be used to find the snapshot name.

Line 35-37: Create a hash table from the snapshot tree.

Line 39: Loop through all the virtual disks connected to this virtual machine.

Line 41-43: Get all the FileKeys for this specific virtual disk

Line 46: Get the name of the first disk file.

Line 48-50: Summarise the size of each file that comprises the virtual hard disk.

Line 52-55: Check if the virtual hard disk is Thin Provisioned. If it is, calculate the percentage of storage that is actually allocated on the datastore.

Line 57: Create a new object based on the DiskInfo type.

Line 58-65: Start filling in the values for the properties of the DiskInfo object.

Line 66-94: Handle the snapshots (if present) for this virtual hard disk.

Line 67: Start by checking if there is at least one snapshot for this virtual hard disk.

Line 68: Loop through all the snapshots.

Line 69-71: Get the FileKey for all the files for this virtual hard disk before the snapshot was taken. Store these FileKey values in the $prevFiles array.

Line 72-78: Find the first pair of FileKeys in the chain that is not in the $prevFiles array. These are the files that constitute the snapshot.

Line 79: Store the pair of FileKeys in the array $snapFiles.

Line 90-91: Store the values in the correct properties in the DiskInfo object.

Line 97: Export the array to a CSV file.

The following screenshot shows a sample run of the script.

There are some interesting results in this sample run.

And last but not least, I suspect there is a bug in the VirtualMachineFileLayoutEx object, more specifically in the Size property of some entries in the Files array.

Have a look at row 20, this disk is not a thin provisioned disk but the AllocatedMB value is less then the CapacityMB value. I would have expected the same value in those two columns.

When I investigate from the console with a simple “ls -l” I see the correct value.

For one reason or another, there are some (very few) virtual disks that have an incorrect size values in the Files table. I couldn’t find out in which cases this seems to happen.

PS: yadr stands for yet another disk reporter